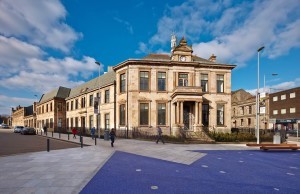 One of Maryhill Burgh Halls Trust’s greatest strengths has been  their creativity in engaging the local community with their project.  From hosting heritage trail days and traditional skills workshops  to involving local people in the design for building’s stain glass windows, the Trust has succeeded in helping locals become  invested in restoration of the Halls.

While keeping to the traditional on the outside, Maryhill Burgh  Halls Trust chose to be innovative when designing their interior.  Their modern and flexible spaces allow for a multitude of  sustainable uses including office space, a nursery, a cafe, a recording studio and a heritage exhibition space. With  over 6,000 people involved with their heritage activities and over 464 events hosted in their first two years alone, the  Maryhill Burgh Halls are pleased to share their personal recipe for success.

Starting as little more than a grassroots movement, the Ancoats

Dispensary Trust began a vigil to prohibit the   demolition of their historic site. Fueled by passion for a building that was the home of significant medical advances, members of the Trust and local citizens started a petition, marched the city, and spread awareness through banners, photographs, news articles and television appearances.

Ancoats Dispensary Trust accomplished a daring feat when they successfully crowdfunded over £368,000 for their project using the Spacehive Platform. Besides asking for money, the Trust provided a multitude of ways to become involved in the project including signing up as a member of the Trust, volunteering or even joining the team as a director. On top of their clear and convincing crowdfunding page, the  Trust additionally has a t 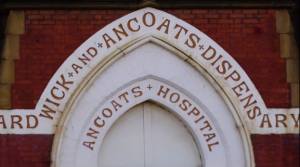 op-notch website giving visitors the
opportunity to learn the history of the site and the Trust, read  over some frequently asked questions, become a member and  view events. Through their online presence and community  involvement, the Trust makes the convincing argument that  saving the Ancoats Dispensary “is [their] opportunity to provide  for a community in need of the retention of its heritage.”

Interested in crowdfunding but don’t know where to start? See the Ancoats Dispensary crowdfunding page here for inspiration on how you can set up your own.

You can also see some of the lessons they learned in our discussion board posts.

When Brymbo Steelworks closed in 1990, it seemed to be the end of almost two hundred year 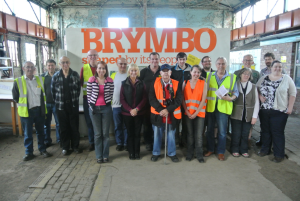 s of iron and steel production that had taken place on the site; however, in 2011, Brymbo Heritage Group stepped in to preserve the history of the area. Formed of former steelworkers and enthusiasts Brymbo Heritage has taken on the daunting task of preserving the remaining buildings and the oral histories of those who had worked there.

Much of the area surrounding the works has been converted into housing, shops, and other developments meant to generate an economic boost for  Brymbo, but the designated Brymbo Heritage Area protects ironwork buildings dating from 1792 through to 1847, two colliery buildings and a pit shaft from 1897, a steel works machine shop from 1920 and several 1960s structures. Now the Brymbo Heritage Group is looking to gain further support as they look to have their heritage visitor attraction fully operational by the summer of 2018. 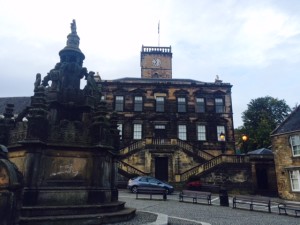 Linlithgow Burgh Halls was the site of our 14th BRICK workshop  and is the centrepiece of the town of Linlithgow, Scotland,  birthplace of Mary Queen of Scots. Once a rundown building that  occasionally hosted local bridge players, Linlithgow Burgh Halls  now serves a myriad of purposes from international art gallery to  multipurpose venue. While keeping to its heritage roots by  bringing in stone experts and incorporating local stories within  the Halls’ decoration, the building has all the modern fittings  needed to meet its users’ needs. The West Lothian Council,  which took on the project, employed Malcom Fraser Architects,  an art consultant and an economic consultant to ensure the long-term viability of the site’s operation.

Now complete, the beautifully designed interior along with the backdrop of Saint Michael’s and Linlithgow Palace in one direction and the rooftops of historic Linlithgow in the other (now easily viewed through a newly added balcony attached to the Provost Laurie Hall) makes Linlithgow Burgh Halls a treasure for brides and workshop delegates alike.

Hear Stuart Eydmann, a West Lothian Council member who was heavily involved in the regeneration of the Halls, share the ten lessons he learned from his experience with the project. 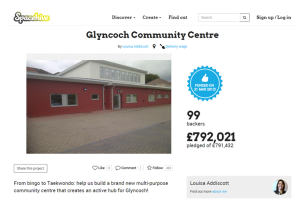 With their crowdfunding campaign driven by the idea of being able to save the community centre by sacrificing the cost of a sandwich, Glyncoch Community Regeneration Ltd raised over £792,021 to make their £1.2 million plus project a reality. The group stressed constant proper preparation and consistent social media campaigning as two of the key aspects that made their crowdfunding venture a success. They also managed to attract some big-name support and gain media attention to help spread the awareness of their campaign. As a result of the group’s work, Glynoch now has a conference suite, an IT centre to host workshops; and recreational spaces for local youth.

You can also go here to see their Spacehive platform for some high-quality crowdfunding ideas. 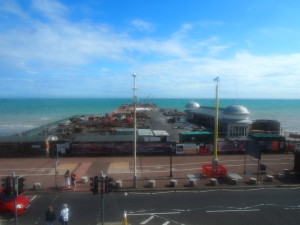 Throughout their passionate and tumultuous battle to save the  111 year-old Hastings Pier, Hastings Pier Charity gained  experience with asset transfer, community shares and high-level  community engagement. In a 6-month community shares setup,  the group raised over £600,000 from 3080 community  shareholders, including several from Slovenia and Australia.

Once the money was obtained, the group did not stop there, as  they know that a pier requires consistent and often costly  upkeep. To ensure long-term viability of the project, Hastings  Pier Charity has plans to bring innovative events such as a Christmas market, open air concerts and cinema, and sporting games to both generate revenue and ensure the creation of a lasting, positive relationship with the public. 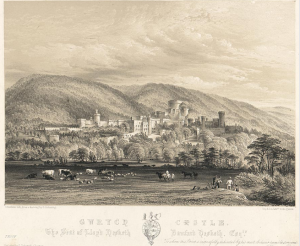 What started off as the dreams of young Mark Baker, turned into the Gwrych Castle Preservation Trust. The Castle, which was built between 1812 and 1822, perched in the hills of Denbighshire. The Trust is in an interesting position, as they do not own the site; however, they have been able to create a successful partnership with EPM UK limited, the Castle owners, in order to ensure that the grand grounds and buildings can be accessed by the public.

In their presentation at our BRICK workshop in Llandudno, members of the Trust explained how social media has been key in helping create public awareness for both fundraising and events. To learn more about how you too can possibly use social media to support your project, check out the case study presentation below.